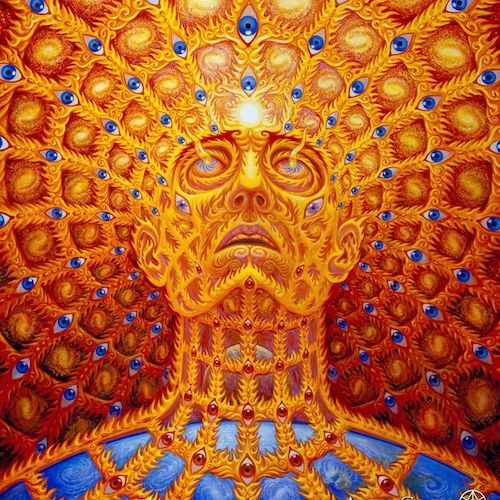 Since participating in my first Ayahuasca retreat in Peru in May I keep returning to a simple question:

What exactly is Ayahuasca?

Is it truly a “plant teacher?” What does that even mean? Is it a plant with consciousness? Is it a spirit?

In other words: does Ayahuasca grant us access to something outside of ourselves?

Or is Ayahuasca best conceived of as a tool of Augmented Reality that merges with our consciousness to give us this wildly magical, seemingly revelatory experience? Is it a sort of technological interface that allows us to iterate on our own code?

If this last comparison sounds funny to you, I would call your attention to the language with which people often speak of Ayahuasca as a form of “deprogramming” or “reprogramming.” Those who use this language are not simply those with a background in tech. In her wonderful book Listening to Ayahuasca, clinical psychologist Rachel Harris observes this same phenomenon in how people often describe Ayahuasca as a form of “reprogramming.”

Depending on our background we might gravitate strongly towards one of set language; in fact, we may well bristle at the alternative description. Those who are inclined to adopt the former viewpoint of Ayahuasca as Plant Teacher might dismiss the use of modern technological terminology as off base at best, and cultural appropriation at worst.

Those who identify more with the latter description–Ayahuasca as a form of technology–will, at best, raise an eyebrow at talk of spirits and plant consciousness and, at worse, dismiss the value of Ayahuasca altogether.

If Ayahuasca did anything, it made me less certain about some pretty firm beliefs that I had about the way that this universe operates. It shattered my ego. It opened my heart. It demanded that I recognize the magic and mystery of this universe.

If I’m less sure of many beliefs here are a few that are still somewhat intact:

#1: Ayahuasca has tremendous value for many people, as a medicine, as a tool for personal growth, and as a pathway for spiritual development (if one feels comfortable using such language)

#2: Ayahuasca is not for everyone.

#3: Our experience of reality is as we choose to perceive it.

The mind is a meaning making machine. To what extent is knowledge discovered, as opposed to constructed?

The majority of those educated in the West no longer subscribe to the notion that religious texts are divinely revealed. Such a suggestion would invite ridicule from most college educated people, privately if not publicly. Yet this is often the sort of language that we use concerning breakthroughs in the domains of science and technology, such as when we talk about “scientific discoveries.”

A recent conversation with Stephen Reid, founder of the Psychedelic Society of the UK, compelled me to reflect on the ways in which we use language around the acquisition of knowledge. While earning his masters in Physics at Oxford Stephen’s studies with quantum mechanics forced him to rethink the very nature of scientific knowledge: do we discover scientific truths? Or is this knowledge constructed because it is inescapability related to the person perceiving it?

Just as priests had supreme power in the the Middle Ages today’s scientists enjoy similar clout. People often invoke scientific studies to support their point of view, though few rarely understand the “small” yet crucial caveats and assumptions and nuances involved in such studies.

Research on Ayahuasca is still very nascent. Unlike controlled substances for which we can isolate a specific compound–such as LSD, psilocybin, MDMA or even DMT, the psychoactive compound in the Ayahuasca plant, Ayahuasca is a mix of natural plants. The very nature of consuming Ayahuasca falls outside the normal boundaries and protocols called for by rigorous scientific studies.

Thus, in my attempts to come to terms with this question–”What exactly is Ayahuasca?”–of course I have nothing to go on but my own subjective experience, along with the thousands of accounts of other people, all of which constitute “anecdotal evidence” by modern scientific standards.

The Western education system in which I was raised has instilled in me a strong sense of skepticism about jumping to conclusions, to acknowledge what is an inference or intuition vs. more reliable, tested hypothesis and theories.

On the other hand, the history of science itself should give us pause as to what we think we know: how many “truths” have been upended over the centuries? I say this not to discount the scientific method but to give us pause and a deep sense of humility before we respond.

My own studies of Eastern religions and meditation have given me an appreciation for modes of investigation into the mind that are rational, empirical and systematic while also honoring that this can–and in fact must!–be done within a subjective framework: the experience of what it is like to be “me.”

While science will someday, hopefully unlock the mysteries of consciousness this knowledge alone would not fundamentally change the mystery of experiencing reality from the perspective of the individual: the sense that we’re “in here,” looking out, and most of the time simply equating reality with our perceptions, our interpretations of those perceptions and the subsequent thoughts, images, and feelings that arise and fall across the projector screen of our own awareness.

Ultimately, we decide how we’re going to navigate every twist and turn of this matrix–at least until Ray Kurzweil has his way and merges us with machines.

Perhaps one day we will merge with machines. Breakthroughs in Augmented Reality technology will undoubtedly offer some fascinating avenues for exploring the mind.

But in the meantime Ayahuasca, and other psychedelics, represent some of the most powerful tools we have for exploring our own consciousness.

So what’s my conclusion: Is Ayahuasca closer to a Divine Doorway or Augmented Reality?

Night after night, Ayahuasca came on like a spirit and felt like a Divine presence. It vastly deepened my connection to nature and to the universe itself. It opened me up to the Divine in the original sense of the term, which derives from its Sanskrit root “dev” meaning “to shine” or “to illuminate.”

At the very least it certainly shifted my own view on the nature of consciousness: I’m not sure if all plants have consciousness but my strong intuition–my intuition, not knowledge–is that this plant certainly does. If neuroscience alone explains the Ayahuasca experience then why doesn’t the experience of ingesting synthetic forms of DMT have this same “spirit like,” even maternal, quality to it?

Call it a plant teacher. Call it a technology. Call it whatever the hell you want. If Ayahuasca’s purpose is to loosen the grip of the ego then let’s be more open to the ways in which people from different backgrounds use language to describe the Ayahuasca experience.

Language is inescapably rooted in specific cultures and particular ways of thinking. If Ayahuasca is about opening to something greater we’re ultimately going to have to find ways to forgive each other for the limitations of our own languages and cultures.

If these plants offer any hope for transcending tribalism in all of its forms–political, economic, religious–then let’s not get too hung up on language, for ultimately we’re trying to describe something which is indescribable.

Any plant or technology that has the potential to allow us to understand our own consciousness, to heal from emotional wounds, and to wake up to the destruction that we are causing to each other and to this planet should be included as a viable, legal and respectable path for those of us who are so inclined, regardless of what we call it.