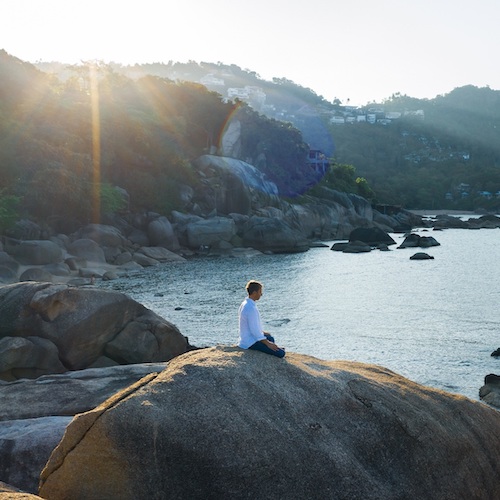 “Yoga is the journey of the Self,

Why do I practice yoga?

It’s a question to which I regularly return, less out of a sense of doubt than from a desire to clarify my intentions. We’ll never reach our destination if we’re unsure of what we’re aiming at.

Some Western students who come across Eastern philosophy object that the very notion of “searching” or a “destination,” is problematic, as to search or strive for some future goal would imply a state of dissatisfaction with the present moment. Western notions of the good life are usually predicated on an idea of striving towards excellence (notably, this is also true for other belief systems in different Asian cultures, Japan being one prominent example).

Yet to conclude that Buddhism or Taoism sanctions laziness and complacency couldn’t be further from the truth. It’s rather a call to live fully in the present, regardless of what arises. To resist the temptation to dwell in thoughts about the past or the future over reality, preferring, for example, some fantasy about how things might be better under alternative circumstances. We all know that game. “Wouldn’t it be nice if…” or “I’ll be happy when…”

Yoga asks us to shift the way we relate to our actions through having right intentions, which is also part of the eightfold path in Buddhism. In The Bhagavad Gita Krishna teaches the importance of acting without attachment to the outcome of our decisions. The Gita also states that “yoga is the journey of the Self, through the Self, to the Self.”

This famous phrase from The Gita hints at an important way of relating to yoga: as a journey to wholeness.

The Sanskrit word “yoga” derives from the root “yuj,” meaning  to “yoke,” or to “join.” That’s why yoga is often thought of as union: between the breath and movement, the mind and the body, the atman (the Self, consciousness) and the Divine. We can chose to interpret these ideas in numerous ways to suit our own beliefs, theistic or atheistic, but either way a theme of connection clearly underpins the practice of yoga.

The origin of the word “religion” also underscores this idea of connection. The English word “religion” comes from the Latin “religare,” which means “to bind.” At its essence, religion is about connection: to fellow human beings, to other forms of life, to our natural environment.

Carl Jung thought that the purpose of life for each individual was to become whole. The journey from fragmentation to wholeness requires us to face our shadow. “Our shadow is everything inside of us that we have avoided, disowned and kept in the dark. It is energy not integrated with the rest of our being, akin to pieces that have become compartmentalized, pushed aside and treated as an unwanted child” (Temple of the Way of Light).

Some ideas are so powerful that they transcend time and space. Jung believed these ideas, or archetypes, were rooted deep in the human psyche and revealed themselves time and again in myths from religious traditions cross culturally. In this view, “myth” is not a derogatory term implying falsehood but rather a narrative rich in metaphor that points to timeless wisdom.

The mythologist Joseph Campbell did much to expand the popularity of Jung’s ideas. More recently, psychologist Jordan Peterson has caused a revival in interest of a Jungian approach to Christianity with his lectures on The Bible.

Peterson has talked about Jung’s belief that “what you most need to find will be found where you least want to look” (from Peterson’s Biblical Lecture Volume 8: The Phenomenology of The Divine). This appears to be Peterson’s interpretation of a phrase Jung cites in his writings on alchemy “In sterquiliniis invenitur”—”in filth it will be found” (The Collected Works of Carl Jung: Volume 13, page 35).

Perhaps this is one facet of self transformation that The Gita alludes to when it defines yoga as “the journey of the Self, through the Self, to the Self.” It’s yet another hint at that deeply archetypal idea that what we most need to find will be found where we least want to look.

This is the hero’s journey into the underworld (the shadow of our unconscious) that is necessary in order for us to triumph over evil, or simply to prevail over own limitations or vices. It’s the movement from darkness to light, from fragmentation to wholeness. It’s an undertaking that Jung thought was necessary for every individual in order to rise up and meet his or her own destiny.

I’m reminded of the words of the poet TS Eliot: “We shall not cease from exploration and the end of all our exploring will be to arrive where we started and know it for the first time.”

While the Buddhist in me resists language about “ceaseless exploration” and the restlessness or discontent that such a state might imply I believe that the essence of Elliot’s statement and Jung’s call to confront the shadow hints at a deeper truth that’s compatible not only with Buddhism but with all of the world’s great religions and myths.

Indeed, the story of The Buddha is yet another telling of the hero’s journey: he heads off into the unknown to confront the difficult aspects of life that he has attempted to avoid at all costs. He is eager to work with all of the great teachers and practices of his time in order to attain a grand notion of liberation, until ultimately his strenuous efforts leave him in a state of exhaustion.

Siddhartha sits down and turns within, vowing not rise until he has found the way through his own inner darkness into light. The journey to his awakening requires him to face down his own demons, personified by Mara.

After moving from teacher to teaching and method to method he discovers that what he most needed to find was in the place that he least wanted to look: inside himself. Through confronting his shadow, he finds not only answers to his most pressing questions, but integration for the fragmented parts of his being.

Of course, it was the arduous nature of the journey itself that shaped Siddhartha along the way, a struggle without which he would not have had such a profound set of insights that changed not only himself but the world. This was how the Buddha walked the path of yoga: through the darkness to the light, through the self to the self. And at the end of all his exploring he was able to come to know the true nature of himself, finally, for the first time.

Upon his death bed, the Buddha gave this parting words to his distraught disciples:

“Be a light unto yourself

Betake yourself to no external refuge

Hold fast to the Truth

Look not for refuge to anyone besides yourselves.”

We can invent concepts, stories about the future in which all of our present problems will no longer persist, a place free of pain and suffering. Heaven. Paradise. Nirvana. But the reality remains that it’s simply another story that the mind feels a need to create about the way things might or might not be.

In moments of honesty with ourself, we can admit that our very need to ask the question–is there life after death–is because we suffer. Even for those who spend much of their lives complaining about how terrible it is, when the ego is confronted with its own demise it’s hardwired to hold on for dear life. Very few of us truly wish to go gently in that good night.

But the hard truth is that there is no easy way out. No express lane to salvation. The temptation to engage in self delusion is understandable, particularly considering the unimaginable burdens that some people have to bear in this life.

We can dare to set our sights on a goal that’s brazingly high but potentially attainable: to imagine yourself on your death bed at which you can honestly say to yourself that you’ve lived the life that you were supposed to have lived. That you didn’t run and hide from that which had to be faced. That you weren’t still haunted and devoured by the demons from your past.

That’s why the hero’s journey begins with a descent into the underworld, in order to confront the shadows of the unconscious, before it involves the arduous ascent to the summit of the mountain. This is why we cultivate attention in our practice: to begin to recognize the parts of ourselves at which we’ve avoided looking for too long. This is the Jungian sense in which I’ve come to understand yoga: to undertake the journey of the Self, through the Self, to the Self.

Perhaps along the way we learn to forge those deeper connections: between the various parts of our fragmented Self, our body and our mind, between each other. This is the promise of yoga: to make us whole.

Be a light unto yourself. Perhaps through more conscious attention to each present moment, you can start being a light for others. Then, at the end of all your exploring, perhaps you’ll arrive where you started and finally know the place for the first time, just in time, to offer it all away, one last time.