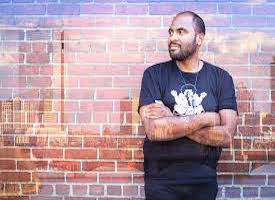 This week I sit down with Lama Rod Owens to discuss the intersection of Buddhist Dharma and American culture and politics. Lama Rod articulates his vision for Radical Dharma: a call to make the teachings of Buddhism relevant for tending to the suffering in the United States in this day and age, starting with addressing issues of race, gender and sexuality in American Buddhist communities.
Shownotes:Coming soon.

Considered one of the leaders of the next generation of Dharma teachers, Lama Rod Owens has a blend of formal Buddhist training and life experience that gives him a unique ability to understand, relate and engage with those around him in a way that’s spacious and sincere. His gentle, laid-back demeanor and willingness to bare his heart and soul makes others want to do the same. Even when seated in front of a room, he’s next to you, sharing his stories and struggles with an openness vulnerability and gentle humor that makes you genuinely feel good about who you are, with all your flaws and foibles, you’re lovable and deserving of happiness and joy. He invites you into the cross sections of his life as a Black, queer male, born and raised in the South, and heavily influenced by the church and its community.

Through his lens you catch glimpses of your own often conflicting identities. Through it all he weaves in time-tested, traditional Buddhist principles and practices that give listeners real tools for healing and evolution.

With grace and humility, he doesn’t claim to have answers, and merely poses questions and encourages conversation so that others may find their own truth.

Lama Rod delivers his knowledge in a way that says, I’m just like you, no better and no worse. He reminds you that he too is human and a work in progress. He asks audiences to call him out if he says anything that is perpetuating misogyny, racism or anything divisive. Lama Rod has done and continues to do his own work, every day, and it’s palpable.

Lama Rod also speaks and leads workshops across the country for organizations such as Summit and Dharma Ocean, check his latest schedule here. He also officiates wedding ceremonies. Contact him to learn more!

Buddhism
Tibetan Buddhism
Radical Dharma
Meditation
Liked it? Take a second to support Hacking the Self on Patreon!