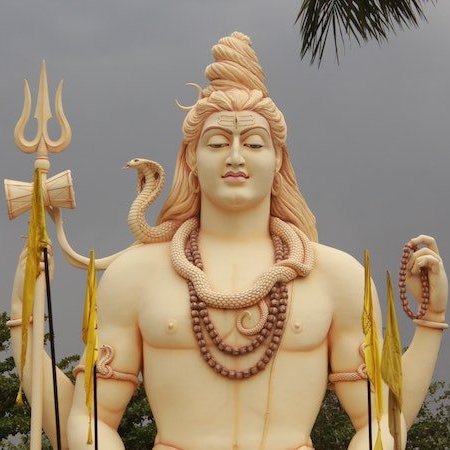 In The Vedas, one of the creation myths of the universe begins with a question. It starts when Shiva, who orchestrates the destruction that lays the ground for creation, asks himself:

Why is it that most of us are afraid to become intimate with the uncertainty of this question? We yearn for growth yet we’re stuck in the same old patterns. All of us want to be reborn, but none of us wants to die.

Some traditions, such as Advaita Vedanta or Zen, invite us to inquire into a question–not as a problem to be solved, but as a paradox to sit with. Dzogchen and Mahamudra also incorporate similar practices (taught as vipashyana) on the path to pointing out the nature of mind. This orientation to practice is so effective because it shifts the mind into a state of openness and receptivity.

The problem solving mind, with its remarkable capacities for reason and logic is beautiful: it is the very expression of the dynamism and creativity of the universe taking form through us. However, when we move through life in a highly analytical state of mind, we can find ourselves encountering life as an endless series of problems to be solved, rather than as a mystery to be experienced.

The qualities of mind that we bring to our attention to is what begins to transform how consciousness constructs the world. Think in terms of positive psychology: we know that it’s highly beneficial for well being to cultivate attitudes such as awe and wonder. In many ways, meditation reconnects us to the deep sense of awe and wonder we felt during childhood, before we became completely entangled in a matrix of thought.

This is why I find that practicing meditation is more of an art than a science. Meditation cultivates clarity and insight and freedom from the prison of thought, but it also invites us into an experience of vastness, of entering into the sublime.

The Vedas describe the universe as being born out of the potency of its own desire, that primordial heat that ignited the spark of creation, transforming into light as the big bang exploded across the galaxy into stars and planets. The universe sprang into existence not merely because of the potency of the fire, but also because of the void from which the fire emerged, that burning energy of the stars exploding across space.

In another telling of the story, the universe begins with a question. Shiva asks himself: who am I? Shiva dares to turn towards the question that many of us spend our lives neglecting, out of fear, out of our own discomfort to sit with the uncertainty of the question.

What is the nature of this mind, this fire of consciousness, through which all of experience unfolds?

The view of consciousness offered here is not an assertion about what is true or false in an absolute or metaphysical sense. These pointers are an invitation with which to play. Consciousness is a play that is inseparable from the divine play that is this universe. The aesthetics of language can invite us into a state of wonder, like the feeling of awe that consumes us as we lay underneath the night sky.

In Nondual Shaiva Shakta Tantra, Shiva is the groundless ground, the vast space across which all of experience unfolds. He is the personification of the intelligence that pervades this universe, including consciousness. The Goddess is the power and dynamism that ignites the fire of consciousness. The divine play of the universe, including the play of our own consciousness, is the union of this intelligence and energy. This is the dance of Shiva and Shakti.

The feminine is that which gives birth, so She is the very source of creation. We can understand a phrase like that in a mythological and archetypal sense. Yet again, this is an invitation to directly experience the nature of your own heart-mind, of consciousness, which is ultimately beyond concepts.

Imagine yourself sitting around a campfire under the stars, watching the flames of the fire dance. The flames are like the sensory experience of consciousness: images, sounds, sensations, feelings, thoughts. The dynamism of the mind is like this: unceasing, creation descending into destruction emerging back into creation. Consciousness is like this never ending dance of those flames flickering in the darkness.

When we stare at a fire the mind is transfixed by the hypnotic movement of the flames. Yet do you notice the darkness, the infinite space, from which the fire emerges?

The mind can relate to that question by trying to move towards an answer, or it can take the backwards step and open into the vastness of the question itself, which invites a sense of dissolving the questioner.

Right now, allow everything about your experience to be just as it is. Allow attention to drop naturally into the body, and settle into the vibrating heart of consciousness.

Offer the question into the altar of the heart: who am I?

When you work with an inquiry question, it’s a balance between resting and inquiring. The foundation for practice is surrender: simply open to and receive your experience, just as it is. Then, occasionally, offer that question into the altar of the heart: “who am I?” Just look gently for five seconds, then rest for a minute or two.

Return to that primordial metaphor of fire one more time, for metaphors are a very powerful technique for learning.

Fire appears vividly within the reflection of your own mind, like images in a mirror, yet if you reach out to grab the flames, it’s ungraspable. You will experience sensations. There will be heat, and if you leave your hand in there for long you will experience pain. But, you can not grasp this object of perception that appears to be solid and separate from you.

As you enjoy the dance of the flames, rest in the darkness from which the flames emerged. The Light of your consciousness is never separate from that darkness, just as objects are inseparable from space. That darkness invites us back to contemplating the question with which the universe began, when Shiva asked himself “who am I?”

Can you become intimate with this question: “who am I?”

Allow attention to descend into the body and to pervade your awareness, like a fragrance filling a room. Then place that question gently on the altar of the heart of consciousness, vibrating out in all directions.

This question, who am I? is not a problem to be solved, but a paradox with which to become intimate. It invites the mind into a state of receptivity, of wonder. Perhaps the clouds part and it’s just clear sky. If the clouds are there that’s fine too; the sky is always there, vast, infinite and illuminated by the sun, whether there are clouds covering it or not.

Rest in that sky like mind and open to the mystery of this question: who am I?

With time, that question can begin to ripen within awareness and the rasa, the flavor, the juice, slowly emerges like the fragrance from a flower in springtime. Savor the openness of the question and its flavor, whatever it might be.

Meditation can connect us with the sublime, into a profound sense of awe and wonder. The bliss that emerges isn’t the kind of hedonic pleasure that we chase in sensory experience. There’s nothing that will make bliss vanish faster than grasping after it.

With time, as we refine our body-mind and cultivate our attention, Tantrik practice allows us to attune to the subtle bliss that springs forth from the depths of the pulsating heart of consciousness. It’s the same union of intelligence and energy that ignited the spark of the big bang, out of the potency of its own desire leapt forth and eventually assumed form as the fire of your own consciousness.

Shiva invites us to consider the question with which this universe began: who am I?

Savor Shiva’s question. Open to the felt sense in your body of what it’s like to experience life not as a problem to be solved, but as a mystery to be experienced.